Multiple office suites spanning the whole floor of a strata titled building near Westfield in Sydney’s CBD are now available for lease either individually or interconnected through Ray White Commercial South Sydney and Henderson & Horning.

The property at Level 1, 155 King Street, Sydney known as The Trust Building and formerly The Daily Telegraph building, is being marketed by Ray White Commercial’s John Skufris and Henderson & Horning’s Will Mulvihill on behalf of a private owner with asking rents from $900 psm pa.

Retailers including Cartier, Chanel and Christian Dior surround the site with Hermes also reportedly relocating to the building.

The Trust Building was built in Interwar Commercial Palazzo style circa 1914. 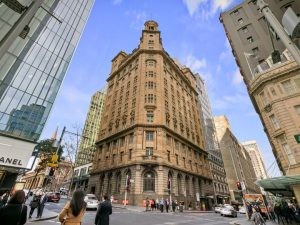